If I had my choice of a liar or a thief, I’ve always said I’d choose the thief. As my mother’s family commonly says “a liar will get you hung”. But I think habitual liars get a bad rep. When I reflect on some of the MANY lies I’ve been told over the years, they’ve added much needed comedic value to my life. It takes a certain strength of confidence to tell ridiculous lies bare-faced and not flinch.

Now I’m not disputing that liars are dangerous! A liar is a thief. They steal the truth from you but if you get a theatrical liar, you are in for some entertainment. I’m a liar magnet – I’ve got several Pinocchios on both sides of my family, nearly every guy I’ve dated has told lies so big they came with boots on and my former coworkers must have attended Richard Nixon’s School of the Truth. But without these characters I wouldn’t have blog fodder!

As an ambitious young girl in an office, I was anxious to make an impression on the team I supported. Enter a middle-aged woman who was rumoured to have a “powdered sugar” problem and who was responsible for a large account. On a particularly busy day powdered sugar lady decided to call in sick and leave a voicemail detailing her reason why. We’ve all called in sick before and probably lied about our reasons. The following transcript of her voicemail is the reason why one must keep lies short and sweet.

I can’t make it in today.Last night I was baking a potata (Bostonian accent). I opened the oven to takeit out.The phonerang so Ianswered and took off my oven mitts.I forgot to put the mitts back on. Then I pickedup the potata with my bare hands and burned them. In the shock, Ij umped aroundand fell back, burning my ass on the oven door” 😳

When I tell you that 8 people never huddled so comfortably into an office cubicle. The emotions we went through. The glances we exchanged. The speed at which that story spread throughout that office.  “She has to be telling the truth? Who would dare repeat a story that embarrassing?”,  “She’s lying so we’ll be too ashamed to confront her for leaving us in the lurch”, “She’s been doing lines all night and hasn’t gone to sleep”.
At the time, over 17 years ago, I believed her and it took some encounters with other liars and a stern chat with the human lie detector aka Mummy aka Boots to see sense. Plus when sugary returned to work the next day, she didn’t display any hesitation or signs of discomfort when sitting down. Surely a burnt bum bum doesn’t heal in 24 hours? I have to give her credit though – I wouldn’t show my face in public after telling a lie that big it could have graduated from high school. 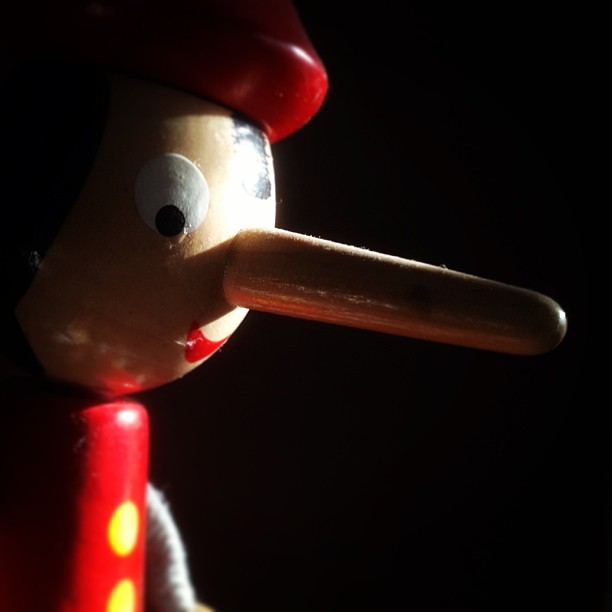 The Old Man Who Lived In the Shoe

When you’re initially dating someone, you want to show the best version of yourself, right? We may stretch some truths, spend some extra time grooming, and hide some embarrassing family members. Well that’s what I do. I suspect this is a phenomenon that women may relate to more than men.

Some 9 years ago I started seeing a guy who was different from everyone I’d dated previously. He didn’t have the latest style of clothing or a new car and he wasn’t the coolest kid on the block. He didn’t smoke weed habitually and was someone I could present to my family. Everyone was quite shocked, pleasantly so. Marcus (again, fake name. get used to it) even had children. In fact, he had 3 of them. This was generally a deal-breaker for me. As the relationship progressed I had this feeling that something wasn’t as it seemed.

One day when he left me alone in his apartment, I went through his cupboards and discovered photographs of children that weren’t the 3 he previously identified as his own. And these pictures were in cards that said Happy Father’s Day. Sigh. Now I know. You get what you look for. I held onto this deceitful relationship in silence for a few more months only for Marcus to post photos of the missing children for the world to see and claim them as his own. To this day, I don’t know if he has 4 or 5 children but I’m thankful I escaped with my disposable income (and womb) intact!

I don’t like to fling mud without taking some accountability for the occasional untruth I share…..Some time ago, I had a secret liaison in Barbados. Very few people knew I was going but for health and safety purposes, I ensured my cousin Charles (you know the drill) knew where I was and I was in contact with him. Charles lived in Barbados at the time. We exchanged a few messages while I was there and I thought nothing more of it. The liaison didn’t turn out that well (more lies that deserve a series of dedicated blogs!).

Randomly on one of my last days in Barbados, Charles’s wife sent me a message saying I’d been on her mind – creepy Miss Cleo moment. We traded pleasantries for a bit and then she asked me “What time is it in the U.K.?”

As I sit on the beach in Barbados I thought long and hard about how to answer this question. Okay, I thought for about ten seconds. I responded “16:00” because it was 16:00 in the U.K. Was this a lie? No. Was it a misrepresentation? Yes. But in my lying defence, she didn’t ask “What time is it where you’re sitting?”

Since this exchange we don’t really speak but the truth is that she went through my cousin’s phone and KNEW I was in Barbados. So the level of deceit was equal from both of us. I laugh when I recall the conversation because she pretended to be genuine and was incredulous when I played her at her own game. She now avoids me or scowls at my presence simply because I went CHECK MATE in her game of liar, liar pants on fire? Poor sportsmanship.

We all know liars but why not find the fun in the situations they try to manipulate if we can? So many of my fond memories are of and around lies told like the guy who called in sick because he  asphyxiated on Pine Sol and bleach fumes (more on that in another blog!). I am thankful for the liars in my life. Without them, I’d be down approximately 65% on laughs.