Being a Tourist is Hard Work! No, it really is. I follow all of these chics on Instagram looking glamorous and effortless as they breeze through Europe and safari in Africa. Meanwhile….. I am saddled down with an overspilling bag. I am sweating cobs, my flat feet are killing me, my back is aching and damn! We just left the hotel an hour ago. Granted, I suffer from a host of health issues – Lupus, Chronic Fatigue Syndrome, Hypermobility Syndrome, Endometriosis, and some other stuff that I can’t even remember. Don’t feel bad, I have access to lots of pain killers. 😉

I have made it my mission whilst on holidays to attempt to be cute but I fail miserably. I start off looking nice in the morning before leaving the hotel but after a 1,000 steps and a few wrong turns I’m like Cinderella after the clock struck 12.

You will arrive at your destination in 20 minutes

Mummy aka Boots and I set off from our hotel, Le Meridien Visconti in Rome to find the famed Trevi Fountain. Apple Maps estimated 20 minutes. Cool, we’re avid walkers who can get to the fountain with time to spare. This was at 10:00 AM. At 10:20 AM we were standing outside of Palazzo di Giustizia while Mummy takes photos. We had only gotten about 100 metres from the hotel. We continued across the River Tiber and marvelled at the Roman architecture of the Renaissance era. At 10:40 AM we were at Piazza Novano taking selfies and being told we would arrive at the Trevi Fountain in 14 minutes (not bad, we made some progress). At 11:40 AM we find ourselves in front of The Pantheon, where Mummy has found herself being proposed to by a Roman soldier. At this point, I sit down at a nearby restaurant and have some Prosecco because I am slightly tired but still exhilarated.

Renewed and refreshed we set off at 12:45 PM for Trevi Fountain and have now switched to Google Maps. We are now being told are 9 minutes away! Yippeee!! Walk around a few piazzas, in a few more circles, pass Zara, switch to Mummy’s phone. We make our way through throngs of bodies hawking pashminas (more like faux-minas), paintings, key chains, selfie sticks (shit, left those in the hotel) and at 13:28 we clap eyes on the largest fountain I have ever seen. It was wonderful and pristine minus the Euros on the ground and more being flung over our heads by those making wishes. I’ll admit, I chucked 5 Euros over my shoulder in hopes of true love, extreme weight loss and vast riches (this probably won’t happen now that I’ve told you). 20 minutes huh GPS? 2 plus hours!!! But what an event filled two hours it was!

I don’t eat meat. This puts me at a serious disadvantage in Italy, the land that loves pork more than my beloved Barbados. I’m surrounded by Parma, Prosciutto, Pancetta, Salami, ox tail, tripe. I’m struggling. It’s only on this trip that I appreciate the term Continental Breakfast. The Italians don’t do hot food in the morning nor do they like savouries for the morning meal. Yoghurt, fruit and a cappuccino are standard fare. I’m a coffee free zone but Mummy Reds vouched for the cappuccino saying it was yummy and so much stronger than those at home in England or the US.

At lunchtime we’re not especially hungry but we stop and at the Pantheon which is now a church. There’s a restaurant opposite and they’re serving standard Roman food; pizza, insalata, paninis. I opt for my favourite, Bruschetta (bru-ske-tah). Mum has the different tasting Coke Zero and I quench my thirst with Prosecco!

Dinner time is when all of our problems begin. Mummy Reds is not keen on lunch so come tea time, she’s famished! Tea time for us is at like 4:30 PM though. After all, we’ve amassed 13,263 steps at this point (Mum’s in a weekly FitBit challenge with her niece). By 5:30 we’d gone into no less than 5 restaurants, cafes, and trattorias and hadn’t eaten. I was grumpy and ugly and Mum was optimistic the next one would be a culinary goldmine. It’s not that Rome was full of bad food. Italians don’t eat dinner until 7:00 PM so finding a restaurant that was open before then was like trying to get Mary J. Blige to stop jumping at her concerts. The end result? Eating Pinsa at the hotel. If you, like us, don’t know what Pinsa is….it’s the older cousin of pizza but oval shaped with a dough that’s made of spelt, soya and more water.

Something that took some getting used to was people smoking in some of the restaurants and indoor venues. Having lived in the US for so long and returned to the U.K., smoking is fast becoming a taboo and certainly smoking inside and in close proximity to food and diners. At one restaurant, we were provided with matches, an ashtray and saw grandparents smoking in front of their grand baby in her pram. Smoking is a large part of the culture.

I don’t play well with others. I attribute this to Only Child Syndrome. 99.99999% of my travel is done alone. I like making my own schedule, taking my own photos and recalling my solo travel memories. But I do have two or three people I wish I could make memories with. Two of those people are my mother and my God brother. Hence, the reason for this trip.

I abhor the thought of tour groups and in general someone telling me what to do. However. Rome is a city where I would advise you to consider utilising tour services at a few sites. If only to avoid the queues and hordes of people at key attractions. The first is the Vatican. I don’t think there would be longer lines to receive free money than to get into Vatican City. Although it is the seat of the Catholic Church, it is also the archive of history and art and tells the story of many a man that came centuries before you and I. It’s also a country wholly within another country. I believe Lesotho is the only other such country.

The other attraction I would advise the use of a tour guide for is the Colosseum. A stadium constructed in both Greek and Roman architectural styles, it is extremely popular. While Mummy and I are lost our tour group, being part of it enabled us expedited access to the site and security clearance. To be fair, I was glad to lose them. I was the youngest by a few decades and the most out of shape. 🙈 Those early A.D. stairs are steeeeep. 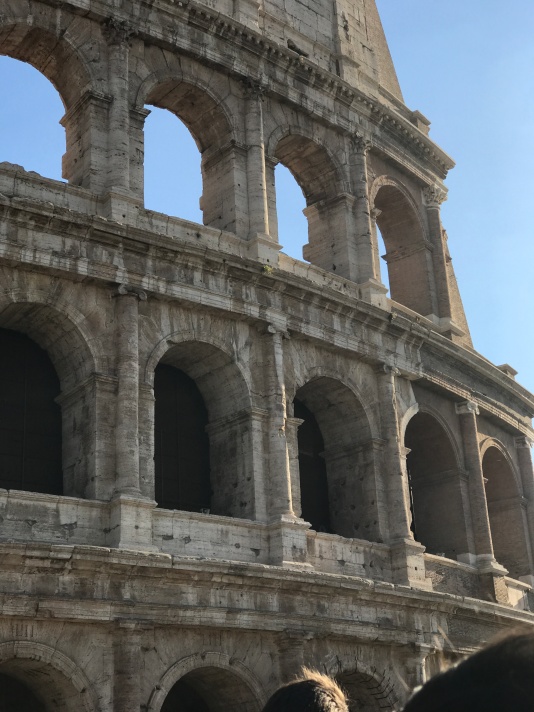 Reds’ Few Roman Phrases My favourite language is French but it’s handy to know a few local phrases wherever you may travel.

Rome is a fantastic city. One I enjoyed sharing with Mummy. It requires stamina. Here’s my rambling tips:

1. Comfy shoes. Many of the roads are cobbled which makes for cute photos but could make for a twisted ankle. Also, seeing multiple sites in a day requires a large amount of walking.

3. Keep your valuables close. Many attractions are densely packed. Pickpockets are nigh.

5. Breakfast is light and usually sweet.

8. Many taxis will tell you they don’t accept credit cards (carta) even if they do so always have cash!

9. The underground system is called the Metro. The ticket machines in the underground stations accept cash up to 20 Euros. For cash transactions over 50 Euros and credit cards, you have to go to the ticket offices which are located within walking distance of the stations overground.

10. Follow traffic signs and signals, crosswalks! Cars are in a rush and will lick you down!!