It’s been a year since I last posted my writing. It’s not that I haven’t penned anything but I can’t post my thoughts if they don’t inspire me in any way.

It was been two years since I last went to Barbados to jump for Kadooment or Carnival. I needed to heal physically and mentally from some deep running wounds. It would have been unfair to my friends and family to expose them to a pained Reds masking her pain with rum and a costumed smile.

This doesn’t mean that I don’t keep my finger on the pulse – watching Carnival band launches, catching Instagram lives of J’ouverts and listening to the latest Soca tunes. 2019 has ushered in a frightening trend in Caribbean carnivals. I will try my best to describe this trend because I refuse to encourage the behaviour further by socialising the vile imagery. In St. Vincent, St. Lucia and most recently Barbados, revellers (party goers) have been seen drunkenly and in daylight mimicking (actually I don’t know if can even be considered mimicking) the act of shoving their faces in others vaginas or posteriors. I repeat – in BROAD DAY LIGHT. in PARTIES. in FRONT OF OTHER  PEOPLE.

How do I know of these acts you ask? Because these buffoons (I am sorry to resort to name calling but these particular discretions have me a shade of vexed that I haven’t been for quite sometime) have taken to doing these things in front of hundreds and sometimes thousands of people in parties or carnival parades (where in one instance small children and elderly women had to bear witness) and were videoed. We live in a digital age where any behaviour, demonic or heroic is circulated real time.

This is problematic for the Caribbean, Carnival and the cultures that rely on tourism revenue. For those of you familiar, travel noire is rapidly growing space within the travel market, recognising that black people globally are increasingly spending more money to fly to exotic locations. Within travel noire is a movement is even more of a niche group of travellers, the Carnival Chasers.

I will be transparent and admit, I am not a fan. Based on personal interaction with a few of them, many of them appear to be irresponsible adults who weren’t popular in high school and feel they have something to prove in adulthood. Many of them are Black Americans third or later generation Caribbean Americans and Europeans hoping to reconnect with the diaspora. Many of them have seen pictures of scantily clad men and women in costume and think it will be reminiscent of college Spring Break. From my limited interaction with these groups, many of them are not interested in the historical roots of Carnival, the fights of my forefathers for freedom and numerous competitions that go into a carnival.

My problems with these Carnival Chasers are many including the obsession with amassing a number of parties as if a competition. Primary amongst my qualms with the CCs is the unsavoury behaviour that seems very unique to this particular group. Let me state, what adults do behind closed doors, is their business that I have no place in. BUT when you put your face in someone’s backside that is cover in mud and sweat in the middle of the street in front of the world, it becomes very much business. You are presenting a false narrative about my culture is. You are telling your friends, colleagues and associates that Carnival is openly putting putting your face in someone’s posterior in the middle of a party.

They, in turn tell their friends and guess what? They plan their next Carnival trip based on this very false narrative. Their friends may even get arrested for carrying out a lewd act in public. Then President Trump is on Twitter talking shit about Barbados because he believes it’s a third world country holding American citizens without merit. Now thousands of Americans have decided they won’t ever visit the country.

What else happens? Potential visitors to the region are perusing social media see a clip of you with head in someone’s ass and decide they won’t visit a country that encourages such disgusting behaviour.

The point of this rant is that the Caribbean is paradise for more reasons than our Carnival. And our Carnival is steeped in a fight to be valued and treated with respect and equitably. Behaving lewdly is not only disrespectful to us personally but has a longer lasting negative impact – a cultural one and a commercial one that many will have to work hard to reverse. Whilst you may think you are just having a bit of fun, your little face in the ass trick, may have cost a few people their jobs in the long run. If you are a member of one of these Carnival Chaser groups – please don’t be misled by people encouraging you to do something you would not do at home in front of your grannies and little cousins.

Thanks for bringing me out of retirement, 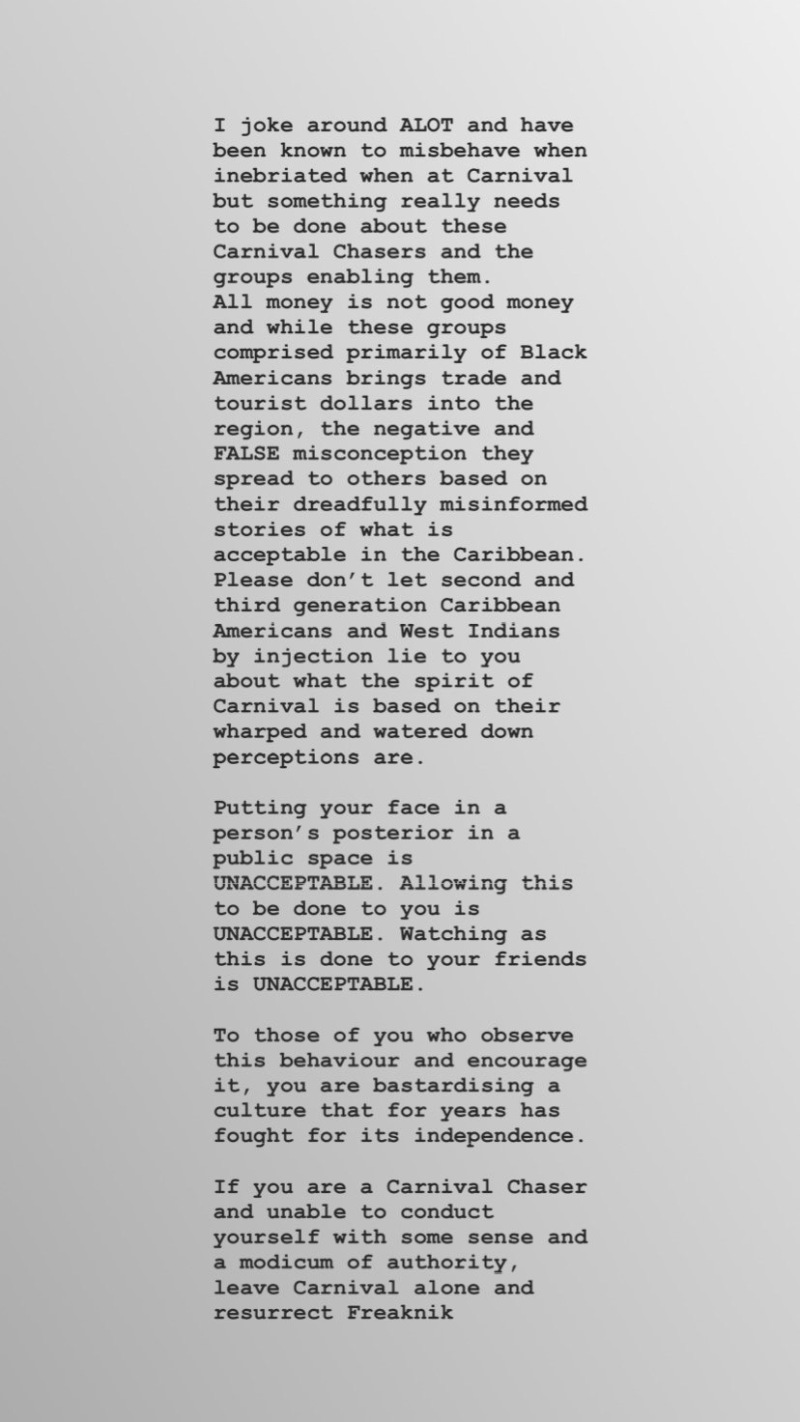