In August of this year Jamie Oliver committed an affront on Caribbean people worldwide, in particular Jamaicans. He launched a product called Punchy Jerk Rice.

Now Mr. Oliver is a serial offender, known for bastardising the food of cultures other than his own (does Britain really have a food culture?) I’ve seen comments from Italians and Mexicans complaining in disbelief at the liberties he has taken.

To be honest, my awareness of his piss-taking was casual until a couple of weeks ago, White Yardie posted a video lambasting the popular chef for this anomaly jerk rice he was selling with pride.

My first thought? “This is a joke, right?” My next thought, after wiping away my tears of utter hysterical laughing, “What in the actual f*ck is this?!” Jerk is the combination of a rub/marinade and a way of cooking, namely on an open flame, grill. The Jerk marinade ingredients include Scotch Bonnet, allspice, scallions, thyme and salt. Jerk, which originated in Jamaica, was a method/recipe developed by Africans enslaved by the British. Before I could judge the PJR (Punchy Jerk Rice), I sought out the ingredients:

Having examined the ingredients, the first problem became obvious, key Jerk ingredients were missing. Second and the most obvious issue was “How the hell can you barbecue rice?!” I tried to imagine it but the only visual I could conjure was rice jumping and hopping into me eye like wild popping corn.

The backlash was almost immediate. PM’s, comedians, even the most docile Jamaican was outraged. I heard radio shows with elderly Jamaican ladies phoning in to to voice concern. The usually jovial  Rustie Lee, born in Jamaica, had to set the record straight and stamp out any defence of this culinary mockery. West Indian Twitter dragged Jamie and I must say I enjoyed it.

But with any action, there is usually an equal reaction. Britons dashed away the legitimacy of concerns and horror pointing out that West Indians cook food like Spaghetti Bolognese and that a mountain was being made of a molehill. The offender took to Twitter and rather than apologising for the offence he caused, added a large heaping of insult to his hot dish of injury-causing PJR.

Something that greatly annoys me about England is the boldness of the majority race to define what offends others. There’s a constant attempt by white people in media to SUPPRESS the opinions, pains and outrage of minorities. This is not limited to black cultures but any culture that is not white English -Scottish, Caribbean, Irish, Italian, French, Polish, Asian- anything that is not bangers and mash bog standard. If I tell you that you offended me, I don’t expect you to tell me that’s daft. You can tell me you don’t see why it offended me but to continue to upset me tells me that you are deliberate in your assault. The normal, non-ego based reaction would be to attempt to understand how an entire group of people are VEXED.

Now, Jamie was wrong. Plain and simple. He came in like a British coloniser attempting to take something indigenous to the people of Jamaica and redefine it for his own financial interests. His defiance represented something deeper than grotty bag of microwave rice. It was a stab in the back of Jamaicans who take pride in their cuisine. It changes the expectation of English people traveling to the West Indies expecting to eat something that does not exist.

If you think these are exaggerated sentiments, try selling some sparkling grape juice in the UK and calling it Champagne!!

This is all a symptom of a larger, more endemic problem in England. Taking shit that doesn’t belong to you, land, people, recipes. It’s a history of colonisation that doesn’t seem easy to erase from the DNA of its people. Whether trying to redefine Notting Hill Carnival or selling some microwave rice, the culture is not a costume for commercial benefit. Some of us wear this everyday and the physical and physiological scars to prove it.

As a teenager, I worked in a hospital delivering meals to patients. One day shortly after starting a patient verbally lambasted me, to the point of tears. She was on a liquid only diet allowing her only jello. She ordered 6 cups of jello – 2 each of raspberry, lemon and strawberry. We didn’t have any strawberry so her tray included 3 raspberry and 3 lemon.  She screamed and got quite close to my face, really scaring a young Reds. I walked away upset and ready to quit my job but after talking to Mummy Reds, I realised this wasn’t about her food- it was about her control. When your life is in free-fall because of illness, food is one of the few things that can be controlled. I think the Caribbean and others as a whole are similar to this upset patient (I suspect she suffered from Cancer). We have had much of our story written and directed by the European masters. We suffered the cancer that is systemic enslavement and oppression. Our food was born of oppression, something for us to be proud of, control, own. 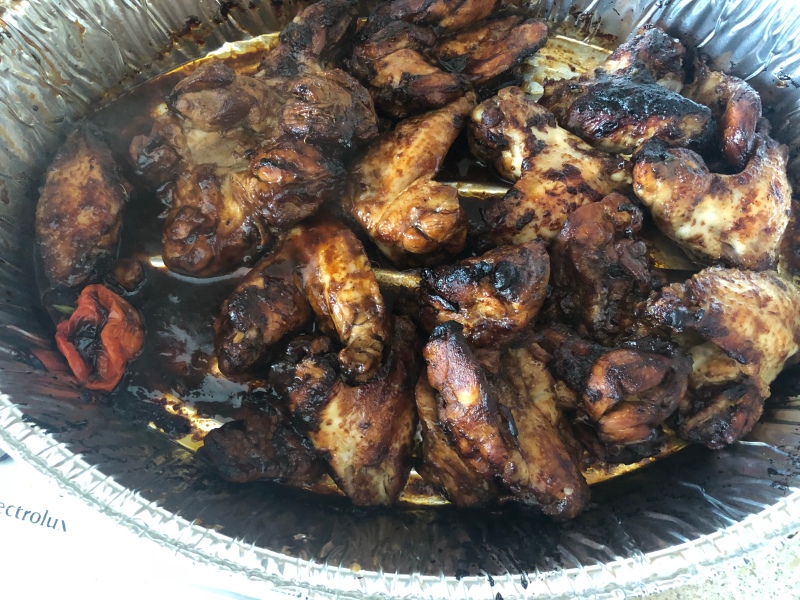 Hey! If you go to Barbados or Trinidad and fall in love with the food, that is awesome (plus I challenge you not to love our food)! But to come back and make macaroni pie without cheese and replace the pasta with bread and then sell it, we have a big problem! The only jerk in this whole cluster f*ck is Jamie Oliver.

And before you come for me, I am not prejudiced. I believe we need to discuss issues that impact our society, whether uncomfortable or not.